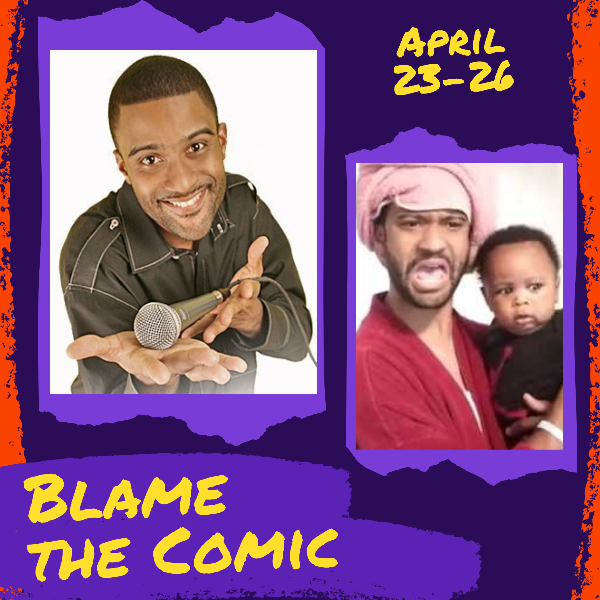 Blame The Comic likes to think of himself as the most known unknown. This comic’s name can be read in two ways: Blame the Comic or “Blame” the Comic, which is exactly what he wants you to do because you never really know where this comic is coming from.

A native Houstonian, Blame is not only a jokester, but a college graduate from the University of Houston. He experienced early success in his career with an appearance on B.E.T’s hit comedy competition show, “Coming to the Stage” (2004) and winning several national comedy competitions, including, The Kings and Queens of Comedy competition (2004), Las Vegas Comedy Festival Regional winner for the college category where he performed at the Stardust Hotel.

Blame has also given back to his community by hosting the fashion and music benefit for “Keep a Child Alive Foundation”. He also was featured in a television commercial for the foundation along with Houston mayor Bill White and other notable Houstonians. Proceeds helped to provide food and medicine for African children suffering from HIV and AIDS.

Those unfamiliar with this Houston-based comic may ask: “Why should I book Blame for an event.” He will tell you that: “All I want to do is deliver that positive cry of the soul which is laughter, and have my audience escape reality for the moment as they laugh in total bliss and gut wrenching humor.”Although it might seem cliché ,“Blame” wants you to live, laugh, love, and then laugh some more. And at the end of the night, if you’ve enjoyed the experience, you’re only left with one thing to do and that is…“Blame” the Comic.

Fantastic talent to be announced soon!